A good summer song song has to send you drifting in the lazy sunlight and "Beautiful Blue" by Mudcrutch does just that. 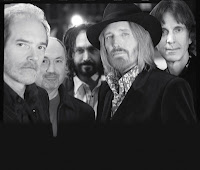 Mudcrutch was Tom Petty's first band back in the early 70s before the Heartbreakers were formed. They decided to get back together in 2008 and have now made two albums. "Beautiful Blue" is from their second release which came out last month. Another requisite of a good summer song is that it must be released in the spring and slowly spread across the summer months like the soap and water from a car wash bucket oozing over an automobile.

Tom Petty has always reminded me of summer. I listened to his records a lot growing up in the 1970s but it was the summer of 1985 that really saw me massively get into him. I saw him on the Southern Accents tour at Alpine Valley stop on June 23rd of that year and it really set up my whole summer. My friend Ann had scored two fourth row seats and we were in heaven the whole night.

"Beautiful Blue" goes with sunbathing, a long jog, or a night time walk. It fits as well with a midnight drive back from an evening of ribaldry in the either the city or the country. Any sort of romantic interlude would greatly benefit with this offering as the soundtrack.

In short, a perfect summer song...