Friendly Fires: Love Like Waves (Track of the Week)

Summer always means Friendly Fires  to me. Their music is light, warm, sunny, and just fucking awesome. Sure, their catalog is small (two albums, a side project and a few singles) but the lads from St. Albans, Hertfordshire continue to stun me with great music.

They are back strong with this track...

Seattle has produced some fine music over the years. One overlooked artist is Damien Jurado who has been churning out albums over the last 20 years. His just released 13th record is called The Horizon Just Laughed and it's fantastic. It sets a very chill mood with the opening track (featured below) and proceeds to slide one into a very romantic and sorely needed melancholy place.

I'll have to give this album a listen again in the fall as it would go well with that particular season.

The Road Still Leads To Utopia

The first concert I ever attended was in the summer of 1980. My dad was a big Todd Rundgren fan and his band, Utopia, was playing at Poplar Creek in Chicago. I had just turned 13 a few months before the show and my dad decided it was time for my rite of passage into the world of live music. 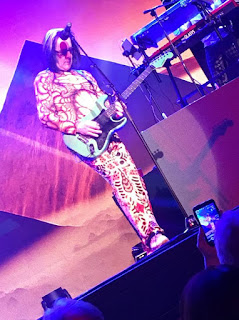 Todd's music had been a big part of my childhood. My dad played Something/Anything, Another Live, Hermit of Mink Hollow and Adventures in Utopia endlessly throughout the 1970's. I count these records as some of my favorite albums of all time. I was so massively excited to see them live I could hardly stand it! It was an amazing concert in a perfect outdoor setting. Seeing Todd and Utopia soon became an annual tradition for me and my dad.

When I lost my father in 1988 to alcohol addiction, Todd and Utopia's music comforted me on a regular basis. Their songs have always had a healing quality about them, including the solo Todd album of the same name. Every time I listened to their music, I thought about the good times with my dad and him not being there was just a little easier to bear. Over the years as I would see Todd live, I'd think about my dad and the music we shared together.

Memories of my father were quite strong last Saturday night in Milwaukee when I caught the much anticipated reunion of Utopia. Todd's band had not really played together as an official unit since 1992. They did warm up for Todd's full album tours in 2009 (minus Willie and with Prairie Prince on drums)  but it seemed less like a real Utopia show and more like a .brief dip into nostalgia. This current tour is a full on Utopia tour, complete with dazzling visuals and a complete musical history of the band. The set list for this tour starts at the beginning and winds its way through the band's whole history.

I was lucky enough to score a VIP ticket which came with a meet and greet before the show. Here's a picture of me and the boys. It was truly an honor to meet them. Michelle Rundgren, Todd's wife, organized this event and did a fantastic job of getting everyone photos with the band and autographs of anything they wanted signed. 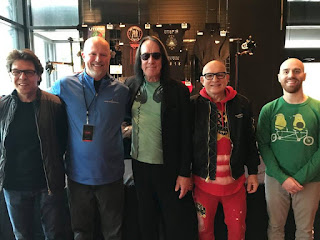 Next, it was on to the show! 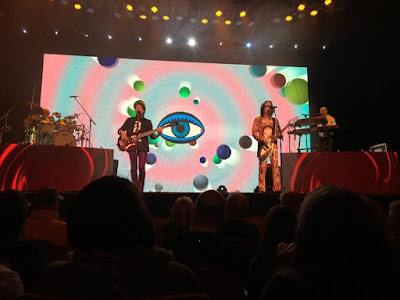 My VIP ticket got me in the fourth row to take in all the power and glory. I was dead center. I was close enough to get some great photos but far enough away that I could take in all the visuals. I remember wondering right before the show was about to start...would the band match up to their younger selves?

Bear in mind, I've seen Todd 20 times in concert, five of which were with Utopia and, given that they are all getting up their in years (minus Gil Assayas, their new keyboard player), I wondered how they would stack up to their previous shows.

From the opening minutes of the first song ("Utopia Theme"), I knew that they were going to COMPLETELY BLOW AWAY all the previous shows I had seen. They were ON from the very first note. It was shocking, to be quite frank.

A flood of wonderful memories opened up and poured out as they worked their way through both sets. The visuals, which were shovel to the head stunning, worked hand in hand with the note for note renditions of all their best tracks. All band members were energetic and polished throughout the entire 2 and 1/2 hour show. Here are some action shots of each band member. 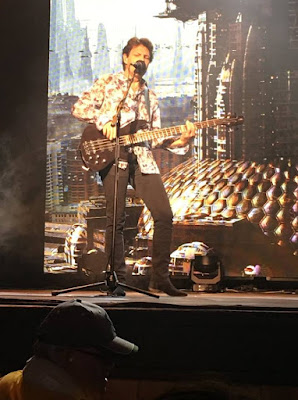 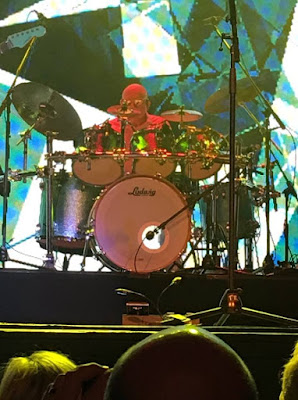 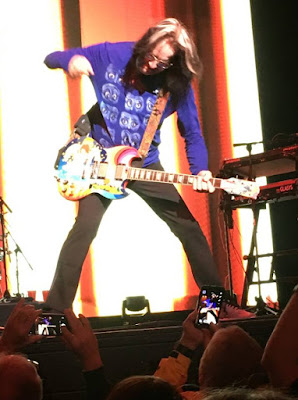 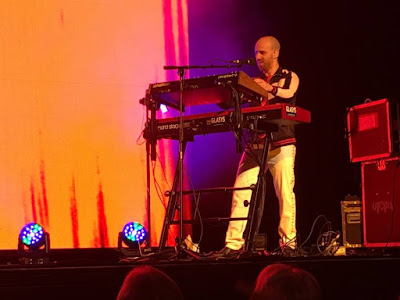 High points for me were "Overture-Communion With The Sun," "Freedom Figthers," "I Will Wait," and "Rock Love." Kaz was amazing as always...the voice of an angel. It was great to see Willie behind the kit again...truly an amazing drummer who brings a ton of power and passion to each track. New band member Gil Assayas was remarkable, perfectly capturing the essence of Utopia's keyboard parts that are so integral to each song. And Todd was...well TODD! A rock legend... 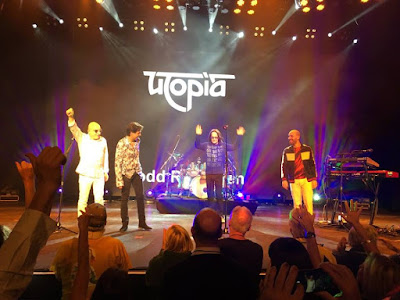 As the show came to a close, I realized that my entire adolescence had played out in my mind, heart and soul.I felt the spirit of my father so very close to me.

Thanks, Todd, Kaz, Willie and Gil for a truly awesome night!
Posted by Mark Ward at 10:56 AM No comments:

Matt and Kim: Happy If You're Happy (Track of the Week)

Matt and Kim are just a ton of fun. A friend of mine recently turned me on to them and I now officially love the heck out of this duo from Brooklyn. I've always been a hopeless romantic so the fact that their relationship fuels their music is completely fucking mega.

They just released their sixth full length album, Almost Everyday, and it's every bit as awesome as all the rest. Here's my favorite track...

Email ThisBlogThis!Share to TwitterShare to FacebookShare to Pinterest
Labels: Matt and Kim

Sydney's own DMA's are back with another gorgeous love letter to Brit Pop. Their first EP and full length were a cross between The Stone Roses, The La's and Oasis. Their latest effort, For Now, offers more of the same with some explorations into new musical horizons. This band is a very underrated and hardly heard of on this side of the pond gem.

Here's the best track on the record. The last minute was tweaked to sound just like an old cassette tape!

Email ThisBlogThis!Share to TwitterShare to FacebookShare to Pinterest
Labels: DMA's

Poor Der Schtingelhoffer. He made five great albums with The Police and six great solo albums. Then, the millennium changed and he want to shite.

2003's Sacred Love sounded like he wanted to make the best Adult Pop album ever (barf!). Songs From The Labyrinth (2006) was his attempt at classical music. It sort of sucked.

Next we saw If on a Winter's Night which made us all realize that Sting could actually achieve a higher level of pretension, although I will say that living in Minnesota connected me with this record in a mildly melancholic way.

We'll skip Symphonicities (an ill advised dive back into classical music) and go straight to 2013's The Last Ship which was made for those folks who hang out in the sea shanty set. How many of them are there? Five? Off the coast of Ireland?

2016 saw return to almost form with 57th and 9th, his first actual pop/rock album since 2003. There were some decent tracks but it didn't really wow me like his earlier solo work did. It seemed like it could have been better if he had a decent collaborator which brings us to this year. I guess all he needed was a Shaggy.

44/876 is the latest album from Sting and Jamaican singer Shaggy. It is EXACTLY the album I have waited for from Sting in nearly 20 years. It has a decided Police vibe on many tracks as well as a return to the rhythms of Dream of the Blue Turtles. Shaggy has provided him with that extra bite that he needed to make a good record.

Yeah, there is a world music feel to it that perhaps causes a half star to removed from the final rating but who cares? I'm feeling summery and all 1983-1985 again and I'm loving it! Here's my favorite track...