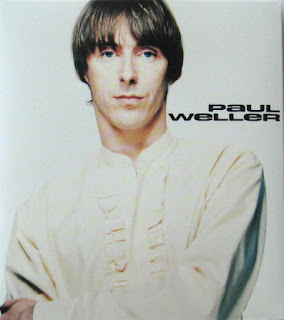 Just over 25 years ago, Paul Weller released his first solo album, leaving behind his two enormously successful bands, The Jam and The Style Council, forever. Thankfully, he's never looked back and has threatened anyone and everyone (verbally and physically) who suggests any sort of nostalgic reunions with former bands. His solo career has seen 13 studio albums, 5 live albums, 39 singles and 3 EPs-each magnificent in their own way.

But back in 1992 things didn't look so good for the Modfather. He had no record deal and wondered just what the fuck he was going to do with his life, especially having just had kids with Style Council band mate, DC Lee. The last Council album, Modernism: A New Decade, was refused in 1989 by Polydor, his record label at the time, for being shite. Odd, because it was just a year or two later when this exact type of music became all the rage in England and around the world. Record company execs...seriously, what the fuck do they know?!?

The Style Council broke up shortly after their last album couldn't see the light of day and Weller went radio silent. He played a gig on December 5, 1990 in which he played some new songs as well as old Style Council and Jam tracks. The new songs sounded very heavily influenced by the burgeoning Acid Jazz scene that was taking the world by storm. 1991 saw the release of the first new material from Weller in nearly three years. The single, "Into Tomorrow" by the Paul Weller Movement was received to near universal acclaim. I think I actually wore out my CD copy, playing it over and over again and never growing tired of each of the four tracks. But the question remained...when would a full length come out?

1992 was nearly half way done before I heard that Pony Canyon in Japan had agreed to release Paul Weller, the self titled and first solo album from our hero. On 29 April, 1992 I picked up my copy from The Electric Fetus, world famous record store in my hometown of Minneapolis. I rushed home to my apartment in Uptown to give it a listen.

What spilled out of my speakers was nothing short of stunning. It was all of those wonderful things about Weller that I loved with the addition of this very soulful and funky style of music that sounded almost hippy as well.The first track that stood out for me was the tres romantique "Remember How We Started." That track ended up being a huge part of my soundtrack for the summer of 1992. I had just broken up with my girlfriend of 2+ years and was in awful shape. This track, along with the rest of the album, emotionally supported me in a multitude of ways. "Above the Clouds" lifted me up spiritually. "Bull Rush" was a great rocker to unleash to. "I Didn't Mean To Hurt You" hit right to my soul.

The standout track and the song of the summer (hands down) was "Round and Round." The origins of this track go back to the Weller produced Slam Slam LP, Free Your Feelings. Weller's wife at the time, DC Lee, was the front person for this group and she does a great job with the track. But it didn't really achieve full blossom until Weller re-recorded it for this album. Check it out.


Talk about the perfect summer song...blissful, sweet, mystical...every time I listen to it, I feel like I'm transported to some European beach or possibly South America. My mind just floats away with this track and I always feel healed after listening to it.

This record is easily in my top ten albums of all time. It's certainly my favorite of his entire career. I only have a few quibbles with it. The UK release, which didn't come until September 1, 1992, omitted "Here's A New Thing" and added a weaker (but still good) track, "Strange Museum." Actually, the original version of "Here's A New Thing" from the Into Tomorrow EP is far superior to the one on the album and should have been included. They also shifted the running around from the Japanese release which I didn't like. It works and sounds best if you get the Japanese version which I have linked above.

As a postscript, I had the good fortune of seeing Mr. Weller for the first time in my musical life that same summer. My friend Matt and I trekked down to the Vic Theater in Chicago and got to see him in support of this record. He also previewed many tracks from his next record, Wild Wood, at this show. It was amazing. He played for so long that they started shutting the place down on him during the middle of his second encore!

I miss the British EP and/or single. It was a glorious format for several decades. You'd get a track that was maybe from an album, forthcoming or current release. Maybe not. And then you'd get anywhere from 2-4 tracks that weren't available anywhere else. It was like a secret treasure between you and the band. But the advent of digital downloading more or less did away with this format. Now it's just a single track to download and rarely an EP or single.

Thankfully, London's Coldplay has resurrected this format with their fab new EP, Kaleidoscope. Containing only 5 tracks, Kaleidoscope represents several points in Coldplay's career. The first track, "All I Can Think About Is You," reminds a me a lot of X & Y era Coldplay. I haven't been as excited about their newer staff so it's nice to seem the return to form. The second track is a cousin to the song "Miracles" from 2015's A Head Full of Dreams. It's more reminiscent of their newer stuff, complete with guest rap artist. It's a strong track but not as good as the first. "ALIENS" is up next and we dive back to early 2000s Coldplay. This is without a doubt my favorite track on the EP.  It glides effortlessly.

The EP finishes up with a live track, "Something Just Like This" (classic Coldplay anthem...sinalong and lighted smart phones aloft) and "Hypnotised" (Brian Eno produced lushness). I downloaded a digital copy but I plan on buying this amazing EP when it comes out as a physical copy on 4 August. Check it out!

There aren't enough positive adjectives to describe BNQT's debut album, Volume 1. A supergroup of sorts, BNQT contains members of Midlake, Franz Ferdinand, Band of Horses, Granddaddy, and Travis. All of the tracks are stellar but "Unlikely Force" reminds me of many summers past with its 1970s dripped vocals and L.A. sound. This is one of two Ben Bridwell (Band of Horses) offerings that are totally mega.

Put this track at the top of  your 2017 summer playlist!