What were the best albums of the year? Here is my top 20.

It's been more an R&B year for me, no doubt...R&B, rap, hip hop...all of the above. This great record from Californian Anderson Paak has been with me all year. Amazing!

This NYC band makes me feel like it's 1979 all over again and I'm 12 years old listening to my crappy AM radio.

18. Nonagon Infinity by King Gizzard and the Lizard Wizard

This Australian band has always been a lot of fun but their new record is dragon level awesome. It's unrelenting...loud...and just plain great.

17. Stay Together by The Kaiser Chiefs

I've been a fan of this Leeds band from Day One. They have a sound, I like it, and they usually stick to it. This record they decided to try something different and it really works. It's soft and ethereal...done right!!

This NYC band shimmery pop is good for just about any mood. Not a bad track on the entire record

Guess what? I like country again and it's thanks to Nashville's Margo Price. Americana at it's finest!

I can't believe that Gibb is even in my Top 20 but what a stunner of a record. Ah, nostalgia...

Alison is from the US and Jamie is from the UK. Together they make great fucking music and have for the last 16 years. This one is their best. Hands down.

12. Curve of the Earth by The Mystery Jets

You know what this London band knows how to do? Make great records. And they keep getting better. One of the greatest British bands from the last ten years that no one really has ever heard of.

Holy crap have I been obsessed with this album this year. Very David Bowie-ish but also a really great record to shag to...

10. The Ride by Catfish and the Bottlemen

Another corker from this Wales band. These lads have a very bright future ahead of themselves. Van is a star!

9. Everything You've Come To Expect by The Last Shadow Puppets

Alex and Miles are back with another volume of your father's music. Or is it grandfather's? Either way, it's mega ultra lounge psychedelic cool.

8. Love and Hate by Michael Kiwanuka

This North London gem is another great example of why 2016 will be remembered as the year of great R&B. Paging Marvin Gaye...(thank god, it's been way too long!)

What can we say about Jamie T? He's irreverent...talented...poetic...blue collar...romantic...and he tells great stories of the UK. Oh, he's from South London. This latest effort sees him going for a more pop sound and it's a massive success.

6. These People by Richard Ashcroft

Fist of god returns after a long hiatus with an absolute marvel of an album. Combining both his Verve sound and his solo sound, RA turns in a 10 song gem. Here's the title track...

I probably played this album too much this year but since it came out in February, it's been in constant rotation. These lads from Sydney, Australia know their Brit rock and capture a nice melange of the La's, Oasis and the Stone Roses.

4. Paging Mr. Proust by The Jayhawks

I was certain that this local Minneapolis gem would fade away and just do nostalgia gigs. Instead, they made the finest album of their career and blew my socks right off my ass! Every track is amazing and if you don't own this record, go buy it now!

I thought 2016 was going to be great when David Bowie released this fab record in January. Then he died and so did nearly everyone else. His final work ranks right up there with the rest of his classics and, at the very least, leaves the world with a shining example of his depth as an artist.

For more information on this record, please click here. 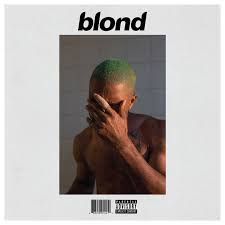 We refer to Frank Ocean in our house as Mr. Ocean because he deserves that much respect. I don't know where to begin with this record. Its stream of consciousness drips over the listener in a melange of trippy wonder. It's unlike anything I have EVER heard and that's saying a lot considering my 40+ years of listening to music. Musicologists will look back on this album as a "Year Zero" type of effort similar to the likes of Sgt Peppers by the Beatles or Is This It? by the Strokes. It's that fucking good.

Mr. Ocean is very good about keeping his music off of YouTube so you have to download it via iTunes if you want to hear it. Trust me. It's worth it.
Posted by Mark Ward at 7:53 AM

Email ThisBlogThis!Share to TwitterShare to FacebookShare to Pinterest
Labels: 2016 in music, Top Albums of 2016