From A Liar To A Knight: Todd Rundgren, White Knight 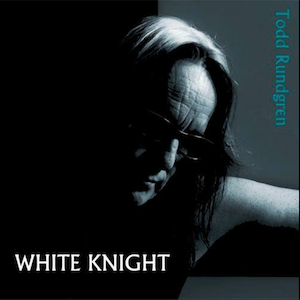 I've been a fan of Todd Rundgren since I was 10 years old. My dad came home from work one day in the late spring of 1978 with a copy of Hermit of Mink Hollow and took my downstairs to his hippie man cave to play it. He had been a fan for a while and I remembered hearing bits and pieces of Todd in my early childhood but this was the first record that I ever really fell in love with. We played it over and over again for weeks and every time it sounded better. I then went back and devoured all of Todd's earlier albums.

After that day, I bought every one of his records the day they came out. I have seen Todd 20 times live, more than any of my other favorite artists, and every show has been amazing and wonderful.

Todd's latest gift to the world is White Knight and it's the album I thought he would make after 2004's Liars. In looking at Todd's 21st century work, I enjoyed Arena (GOR), didn't think much of Johnson (over produced blues), thought State fell a little short but was still cyber punk cool, and generally dug Global Nation. These five albums that came out between Liars and White Knight sated my Todd needs but weren't on the level of either of these records. Liars is still one of my favorite Todd records, reminding me of all the reason why the Runt rules. White Knight matches it note for note.

Calling on a cavalcade of guest stars, Todd has turned out a strong contender for Album of the Year 2017. We have all the requisite keyboard driven pop songs ("Come," "Fiction"), the goofy song ("Buy My T") and a great Utopia-esque song ("Let's Do This") that reminds me of late 70s/early 80s Todd.

"Sleep" sounds an awful lot like Todd wrote it for XTC. Joe Walsh has never sounded better on guitar. "Deaf Ears" features Trent Reznor and sounds like, well, Trent Reznor. It also reminds me a great deal of 1994's No World Order. "Chance For Us" features the man who Todd taught how to sing-Daryl Hall.

But the best track is clearly "Tin Foil Hat" featuring Donald Fagen on lead vox. Being a huge Steely Dan fan, I was over the moon about two of my heroes collaborating for the first time. It sounds like a long last Dan track from the Royal Scam era yet still retains inherent Todd-ness. Of course, the topic of the song is fucking hilarious! Check it out below and go buy this record!!