The Band of the Decade: Catfish and The Bottlemen 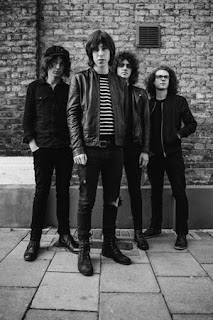 The first time I heard Catfish and the Bottlemen I loved them immediately. It was the opening track from their first full length, The Balcony (2014). "Homesick" sent me straight away to that magical, Brit-rock place that I go to when I new band from the Holy Land captures my attention. The progression, as it always is, was the same. I found out where they were from (Llandudno, Conwy, Wales), I imagined the first time I would see them live, how the club would smell where I would see them, how the booze would taste that I was drinking, and how the people I was with would enjoy the show with me.

More importantly, Catfish and the Bottlemen, like many Brit Rockers before them, became the underlying soundtrack to my inherent coolness. They were another brick (a BIG brick) in my stellar music taste which drives personality. The foundation of my ego/id/superego is British music in all its historic splendor. It propels me every day to new levels of completely fucking insane exhilaration. It gives me confidence and swagger.

So, as the 11 tracks of that first Catfish record unspooled for my aural delight, I was beyond hooked. I was obsessed! I immediately tracked down their first EP (The Beautiful Decay) and several rare tracks ("Tortuga", "Asa" on the Rango single) so I could have as much as possible. I began to play all of their tunes over and over again with all of their stories becoming part of my story. Every song, as related by frontman Van McCann, seemed to be made for anthemic sing-alongs at a festival show. All of them were about great loves that I've had and never had. "Cocoon" is one of the greatest rock songs of all time. "Rango" gives me the shivers every time I hear it. "26" makes me want to talk to all the girls I was too afraid to talk to when I was a teenager. Here is "Cocoon."

Speaking of teenagers, both my own kids went bananas over the album as well. That says something. A Gen Xer like me digging a band is one thing. We were born to do that. But a Gen Zer? That means the band is mint. The Balcony quickly became my pick for Best Album of 2015.  It has since made my top 101 albums of all time, clocking in at #51.

The live shows have been nothing short of extraordinary. I first caught them on June 9th in 2015 at the Varsity Theater in Minneapolis (my hometown). I was struck immediately by their showmanship and, in particular, the ever charismatic Van McCann. The first time you see him sing and play guitar one word comes to mind: superstar. That dude knows how to electrify a crowd. They next played the main room at First Avenue on June 15, 2016. That show was fucking astounding....one of the best I have ever seen there. I caught them again on December 1 later that year at Myth. The latter two times I saw them I brought my wife and teenage kids with me. These were two of the most memorable times we've had as a family. Hearing great music and hanging out with the people I love the most!!

Here is a full show they played that year at T in the Park. It gives you an idea of how awesome they are live.

2016 also saw the release of their second effort, The Ride. Sophomore efforts invariably have songs that, for whatever reason, didn't make it to the first album so it was every bit as amazing as The Balcony. Top tracks are "Twice," "Soundcheck," "Red," and "Oxygen." Here is the video for "Oxygen."

This year the band released their third full-length record entitled The Balance. Here is the opening track from that record.

The lads have once again knocked it out of the park with another eleven tracks of pure fucking genius. After one listen, it was obvious. Catfish and the Bottlemen are the Band of the Decade. They have set the bar for the years 2011 to 2020. No other band comes close. They are yet another gem in the line of UK royalty...The Beatles to David Bowie to Pink Floyd to U2 to Oasis to Stereophonics to the Arctic Monkeys and now to Catfish and The Bottlemen.

Note: Catfish and the Bottlemen are currently touring the United States. Check them out when they come to your town. Here is their full discography

Email ThisBlogThis!Share to TwitterShare to FacebookShare to Pinterest
Labels: Brit Rock, Catfish and the Bottlemen