Nothing Revolutionary At All 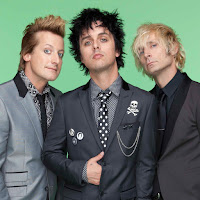 Every few years, Green Day releases a new record and it's really great. Revolution Radio, released last week, follows this pattern. It's 12 outstanding tracks, once again, from the very well aged trio of former punk rockers. There really isn't anything revolutionary about it because they made another fucking awesome record just like they always do.

Green Day makes albums like people used to make them back in the 70s and 80s. In fact, listening to this new record, even from the first few chords and lyrics, makes me feel like I'm a teenager again in those decades. Like American Idiot and 21st Century Breakdown, Revolution Radio is a thematic album that touches on themes of old age, rebellion, war, and, of course, love. Our current political state is ever present as well.

My favorite track is the title number. It's vintage Green Day that makes you want to jump around, do a keg stand, and party with your pals. Check it out!